The objectives of this lab assignment are as follows:

To properly complete this assignment, you will need to apply the following skills:

You might want to take a look at the following websites to gain a better understanding of this cipher:

Please note, however, that what you read at the above sites will be the rules for the cipher as it exists, not as we are going to implement it in this assignment. We are going to modify the “rules” of the cipher, making our work a little easier.

As a user, I want a new Windows application that is capable of performing encryption and decryption using a modified Playfair Cipher.

“For two thousand years,â€¯codemakersâ€¯have fought to preserve secrets whileâ€¯codebreakersâ€¯have tried their best to reveal them.” – taken from The Code Book: The Science of Secrecy from Ancient Egypt to Quantum Cryptography by Simon Singh.

The idea for this problem comes from this book. You will encrypt and decrypt some messages using a simplified version of code in the book. The convention in cryptography is to write the plain text in lower case letters and the encrypted text in upper case letters. We will follow this convention for this problem. We will only encrypt/decrypt letters. Any other characters including numbers and punctuation will be left as is (i.e. 1 2 3 . , – etc).

From the user, you need only two pieces of information:

The Playfair Cipher is a substitution cipher. It is a little more complex than what we are going to attempt, but the lesson here isn’t about recreating a cipher that was developed in the mid-19th century. This is all about arrays (both single and 2-dimensional) and treating strings of text as arrays of char characters.

The Playfair cipher is not capable of encrypting numbers or punctuationâ€”only alphabetic letters. Therefore, this typically was used for important but not critical information or to relay information about events that were immanent knowing that it would take opposing forces at least a couple of hours to crack the code if they could at all.

The Playfair cipher uses a 5×5 table or matrix into which 25 of the 26 letters of the alphabet are loaded. This means that one letter will have to represent two letters in the alphabet. For example, i and j can be combined as the letter i. 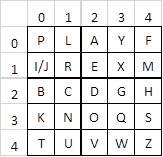 The Wikipedia article on the Playfair Cipher shows the matrix with the keyword PLAYFAIR EXAMPLE. This is a long key, but it doesn’t matter because we need to get all the letters of the alphabet into the matrix anyway. We must drop the duplicate letters in this keyword and eliminate the space between the two words. Hence, our matrix would look as shown here. 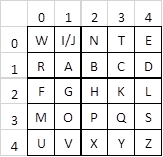 If, however, the keyword is WINTER, then the matrix should be loaded as shown to the left.

In one further example, if our keyword is FERRET, then the matrix should be loaded as shown to the right. Notice that we drop the duplicate letters R and E, resulting in the first four letters of our keyword being FERT. Then, the remainder of the alphabet is loaded into the matrix ensuring we don’t duplicate any letters.

Note: While my images show the letters I and J joined together, we basically change the letter J to I when handling our encryption.

Now that we have created the matrix we can both encrypt and decrypt a string of text/phrase. The way we are constructing our matrix is identical with the mechanics of the Playfair Cipher. What we are changing for our assignment is the way a string is encrypted. Here, the rules in the actual cipher are a little more complex than in our assignment.

Let’s suppose that we wish to encrypt the following phrase: we attack at zero six hundred hours.

We move through this phrase one letter/character at a time. First, we start with the letter w and note where in the matrix this letter is found. In this case, using the previous matrix example containing the keyword FERRET, we note the first letter of our phrase is found in row 4 and column 1 [4, 1]. We reverse these values such that we have [1, 4] and the letter at that location is H. Hence, we change the letter w to the letter H.

Continuing in such fashion our phrase ” we attack at zero six hundred hours. ” is translated to:

As a final note to the above requirements, because this is a Windows desktop application you must submit a zip of the entire project folder for grading purposes. A desktop application contains multiple files beyond just the code file that must be kept together.

How the application looks and how it presents its information to the user is up to you. But it must meet the minimum requirements noted above.

This entire exercise is intended to be an exercise in arrays (both single and 2-Dimensional), as well as in handling strings and individual char letters.

In addition, we want to begin to think about best programming practices including the use of methods and adherence to two additional principles:

Certainly, get your code working, and then work to refactor it to observe the above two principles.

The first principle means that you don’t want duplicated code; this is the basis of the DRY principle. If you find yourself repeating the same or very similar code in two or more places in your application, then this might be code that belongs in one or more methods.

With respect to your methods, you want to observe the second principle. This actually is a pattern and is one of the bedrocks of object-oriented programming. Any method should have only one reason for change. This generally is interpreted as meaning that any method should have only one purpose. While this isn’t technically accurate we aren’t at the place in the semester where we can adequately explain what “reason for change” means so we will stick to this pattern meaning “single purpose.”

The example output provided below is simply an example. You do not need to format your output to look like this example. You simply need to ensure that you have met the technical requirements for this application.

Following is example output for this application: 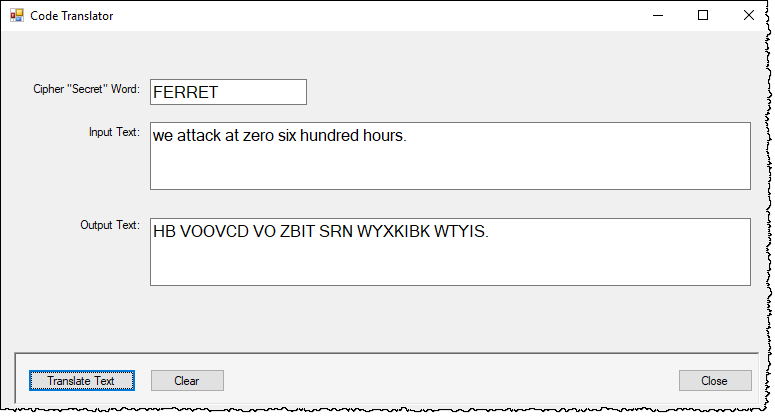 In this example, we have taken the output text from above and are using it as the input text demonstrating that the same application and methods can encrypt as well as decrypt messages: 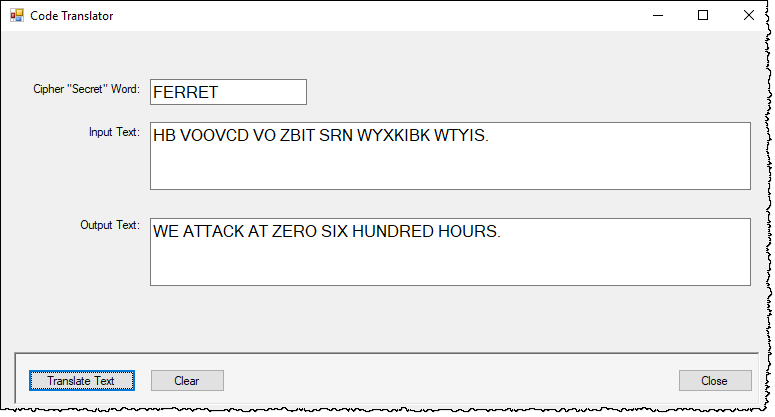 On what stereotypes of indigenous peoples does this image draw? Notice, for... EDU 642 week 3 DQ 1
Scroll to top
Open chat